The construction of the Metaverse is one of the greatest art projects humanity has ever undertaken. Technology makes the scope of this project as wide as the world is. Everyone is invited to give their vision and contribute to the Metaverse by sharing their creations on the Blockchain.

Throughout my life, I have become tremendously interested in our consciousness and its transformative power. There is a direct connection between our consciousness, our spirituality, our freedom, and our creativity. As humanity approaches the Aquarian age, the consciousness of man will awaken en masse. It is no coincidence that the Metaverse has now emerged and will start evolving. Separately, it is my belief that the power of technology will contribute to a shift to a higher frequency of our consciousness. Humanity will become Metahuman.

The Metaverse is an essential part of our future society in which our consciousness will transform through the application of Technology. Our current (virtual) reality will change to a Metareality in which we can evolve as Metahuman.

Terra Incognita:
In the middle of the universe shines a miraculous blue planet called Mother Earth.

For millions of years, the universe has been in transition to evolve. An energy that shapes space as the Universe. The Universe manifests itself in the most flamboyant way driven by an abundance of creativity and creative power. An energy that made countless forms of life possible.
The existence of this beauty had to be witnessed and so the Universe gave man consciousness. It caused the universe to be seen, to be experienced, with our body, our consciousness and six divine tools: our senses.

The presence and manifestation of the Universe was confirmed by our consciousness.

Man’s consciousness is directly connected to all life forms here on earth. This connectivity in our consciousness created a connection with the universe.

All life forms have worked together for thousands of years to create paradise on earth. The immense energy of the universe was doing its job. Paradise earth had come into being.

The Universe proved its existence through the consciousness of man.

Consciousness:
Consciousness provided an objective view of the physical world. A foundation had been created on which to develop ourselves in balance with our environment, while celebrating life.

For 26,000 years, across all continents, in every civilization, you see a history in which our consciousness plays a key role. Human beings are searching for answers based on questions that consciousness poses to us. We feel our connection to the Universe.

Each civilization, cultures, societies, and individuals together have caused our consciousness to shift to other levels and transform toward the truth of our existence. The knowledge acquired was passed on through writings, customs, and rituals.

For so many thousands of years, man and his earthly paradise has expanded and developed.

Quotes: Thich Nhat Hanh … “To live in the present moment is a miracle”.

Man, as creative conductor of the universe.

And so, begins the emergence of man’s creative power. Our creations, our arts, our expression, our inventions, the progress of humanity.

Man’s consciousness manifests itself in many ways and wants to shape its presence. Our creativity and authenticity allow us to create, just as the Universe does. We are capable of shaping our physical environment to our liking, of building a world. Our creative energy has proven to be immeasurable. Within a few thousand years we managed to populate the earth world. With Industrialization, capitalization and annexation, man has conquered the earth and even beyond.

Today, we are on the eve of further development of our latest technologies. These technologies can reconnect humanity, heal us, fix our mistakes, and lay a new foundation for the future.

The advent of the internet in the 1990s was ground-breaking and promising. The gateway to the world was born. Everyone was suddenly connected to each other. The internet facilitated communication, knowledge sharing, data exchange and entertainment. It developed into a massive global digital world parallel to our physical world. The digital age was born.

Initially the internet was decentralized, but soon market forces took over and the internet became dominated by large parties (Big Tech). These large companies dominate data exchange with a view to taking over the internet. All of our digital data is currently centrally controlled by companies and/or governments.

This phenomenon made us look for a different way to handle our data. A means was sought for processing all this data decentrally, without the intervention of a third party. To facilitate this idea and need, Blockchain technology was born.

The Blockchain gives people back their freedom through its decentralized technology. In essence, human beings want to connect with each other in an honest way, under self-determined conditions.

Our transformed consciousness has changed our view of the world. Our desire for authenticity, independence, connection, freedom has never been greater. Now that we can free ourselves from that centrally controlled mechanism and choose new technologies. Without the intervention of others.

This transformation is driven by Blockchain technology and is awakening us to a new reality. A digital reality in the form of the Metaverse.

Currently, the world is undergoing a major shift from an old centrally controlled world to a new decentralized one.

We are beginning to see the value of Blockchain ecosystems. For example, the way digital currencies like Bitcoin have developed. Or the development of ‘Non-Fungible Tokens’ (NFTs) that give value to digital assets. All these assets are registered together in the form of code in a public registry.

In this digital quest for decentralization, we discover the parallel transformation of our consciousness, authenticity, and creativity. When we stop conforming to our self-imposed limitations or other people’s concepts. When we learn to be ourselves again and open our natural universal channel in the creation of our world and the Metaverse in the Universe. The Metaverse.

The start of building a new digital world where instead of commercial interests, the interests of every individual around the world is paramount. We are all equal. Everyone has access to the same technologies so that everyone can build their own kingdom. People will be able to manage assets digitally and transparently, and live in freedom, love, and connectedness.

The Metaverse is the future of our society. It changes the way humans deal with reality. It is a world where all the new technologies come together such as Artificial Intelligence, Augmented Reality, Blockchain and DLT. All these technologies, combined, will determine the future of humanity. It will be a digital Ecosystem, above our reality.

About two hundred years ago in a monastery located somewhere in the hills of Japan there was a monk who had dedicated his life to Zen Buddhism. His name was Genshin and in addition to his devotion to Buddhism, he was an artist. He was a writer, poet and at the time worked with the advanced technique of woodcuts. The time has not been exactly established but it is known that sometime in the 19th century he wrote a book about the story of the Buddhist paradise.

On rice paper he wrote the wonderful story of the Buddha’s journey to paradise. This was a spiritual journey that can only be made with an awakened mind and higher consciousness.

The story was chronicled in the booklet and decorated with various woodcuts of the Buddha on his way to Paradise.

The little book made its way around the world for about two hundred years before finally ending up for sale online, where I bought it.

The thought of a booklet traveling such a long journey can only mean that the knowledge it contains should not be lost.

When the booklet came into my possession, however, it turned out to be so brittle that the ravages of time had not done the delicate paper much good. I decided to save the pages that were still in reasonable condition by digitizing them.

Here began my mission to pass on and revitalize Genshin’s work. And so, my FORTUNE TREES was born.

My Fortune Trees contains a message to all that we are the strength of our existence. We can grow against a background of our consciousness. This is a shift that we can achieve by finding the power within ourselves. Our maximum potential. We can experience the beauty of our existence of our Metareality as metahuman..

We must be aware of where we came from and understand that we can build on where we are going. Humanity’s greatest art project, The Metaverse, is underway. Blockchain technology is changing us. It will help decentralize the world and, in this process, we will reinvent our own authenticity and creativity. We will become reconnected with the universe, the earth and humanity.

My (N) FORTUNE TREES will flourish in the Blockchain. 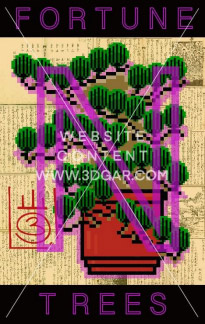